In His Own Words:

Prospector Finds Lost Mine at Muroc – 1930

EDITOR'S NOTE: Joe Pauley Sr. was born in Muroc (now Edwards Air Force Base) in 1912 (He passed away in 2000). He has prospected and mined gold all his life and has been leasing property near Standard Hill just south of Mojave since before 1965. He has one son, Joe Pauley Jr., who helps out at the mine occasionally, and who lives in Rosamond. Here, the elder Joe tells, in his own words about one of his first experiences at finding gold in the Antelope Valley. The tale was edited somewhat because of space limitations, but an effort was made to keep the story as complete and colorful as it was coming straight from the prospector's mouth.

I was 17 and it was in 1930. 1 was settin' out on the little bench that was just at the depot there at Muroc, then a new Buick car pulled up in front of my dad's place, which was right across from the depot. An old bald-headed man about 60-years-old got out and come over to the depot and talked to me, and he said that he was lookin' for a tripod over a hole. He said that if they found that tripod, well then they felt that they could locate something that they were real interested in. Fred Latham was the guy's name I found out later, and the guy in the Buick was Judge Nosser from Randsburg. 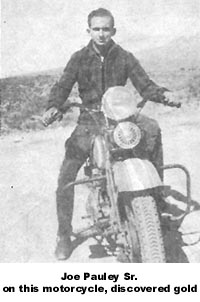 Fred come over and stood up for a little while and told me, he said, "I'll tell ya this story, and what I'm looking for."

At that time, Acton had a little mill there, and it was quite a little mining settlement.

And he said they were goin' along and when they got down near the East end of Muroc Dry Lake, why, one of the fellas picked up a piece of rock and looked at it, and it was jus' full of gold. So he called to his partner, and they just immediately made camp and started diggin' on it.

A ton of gold

And they took out about a ton, and which was a load for their burros. They had a whole bunch of burros, and took it then. And they covered this place back up where they found it, and they headed on for Acton. When they got to Acton, why they milled this ore, And it brought 'em – netted 'em – a 'leven hundred dollars. Awful rich ore.

So he said that they had always figured that this had jus' fallen over. It had been kind of an upright vein, and that it had kinda undermined and fallen over. When they dug down on it, why of course it'd run out. And they figured if they trenched across the other side of the little wash, why they might hit it. So they always figured-on comin'back.

But there was another strike up north somewhere and they took off and went to that, and they never got back until about 1910.

Why, one of these guys by the name of Ed Lieb, he came back and looked it over, and where they had taken this ore out, they had a burro corral, and they had a bunch of burros in there. And they were minin' some bull quartz which didn't run hardly anything at all in gold, about a hundred yards west of there. And he figured, "Well, we can't get this property, it's already filed on. Why, might as well forget it. And maybe someday, we'll come back.

So he took back, and went back home, and then he later bought a hog ranch up near Kernville.

This Fred Latham knew this Ed Lieb pretty well, and he was around prospectin', looking' for a stake, and it was in the Depression when money was hard to get. And he stopped and talked to this Ed Lieb, and Lieb done told him about goin' on this trip and about the ore they'd taken out way back in 1897.

And he says, "Why doncha. look for that?" he said.,"Fred, you might find that and trench across and make yourself a little stake."

So, he knew Judge Nosser. Course, Fred was on the tramp; he was hitchhikin'. Freight train, any way to get there. Those days, they had a railroad that ran from Kramer Junction to Randsburg. So he went down there and got a ride on a freight train and talked to Judge Nosser.

Judge Nosser said, "Why, sure I'll take you down there, and we'll see if we can find it.' 'Cause he was quite a noted minin' man, that Judge Nosser.

Looking for a grubstake And he told me this story, and he said, "Well, how'd you like to grubstake me and," he said, "If we find anything, we'll jus' split it."

So, I was jus' a kid, you know, 17, and full of adventure. So it sounded good to me. And I went in, talked to my dad about it. And he said, "Well, you got money in the bank," he said, "if you want to stake him, and it shouldn't cost you much," he said, "go ahead. " He said "I'll feed him. He can stay out in the bunkhouse with you, and he can eat with the family.

This was during the weekend before my Christmas vacation. It was Friday, and we had Saturday and Sunday to prospect. So we got up at daybreak the next morning And I had a motorcycle and a Model T Ford, at that time, and he drove the Model T Ford, and I drove the motorcycle. I like the motorcycle, 'cause I could, you know, scout around and look the country over.

And we looked oh, several places where I'd thought there might have been a tripod at one time, and couldn't find a thing. It didn't look very hopeful.

My dad got kinda interested in it then. He said, "Why don't we jus' go up and talk to this Ed Lieb," he said. That maybe we could get some more information, and we can find it.

And, boy, and that tickled me, you know. And Fred Latham, he liked that. He thought we might have a chance then.

My dad, he worked seven days a week, so we had to leave when he got off at four o'clock. We left and went up to Kernville, and, of course, it was after dark when we got there.

We got up there, and he was there, this Ed Lieb. Had this big hog ranch, and Fred Latham had tipped us off.

And my dad said, "Well, just accept him like he is."

So, Fred introduced us to him, and he seemed jus' an old timer, you know, an old time prospector.

But he'd chew this tobacca, and he had a tooth out in front, and he's spit that tobacca out through those two teeth, I'll swear, at least 15 feet and maybe further. There was this knothole in the floor. And he'd go right over and most of it would go right on through that knothole.

And anyway, we asked him then about this place.

And he told us, "Well," he says, "as I remember, when we went back up there in 1910, we had, a little trouble findin' the place even then." But he said, "We went by a spring on the east side of Muroc Dry Lake, then we went kinda east, and maybe a little south. And he said, "We passed a belt of Yucca trees, giant Yucca trees. It was real sandy. " And he said, "When we got through that belt of Yucca trees, why, there was some little low granite hills." And he says, "It was kinda in the middle of those hills where we had found this gold."

But the moment he told me that, I knew exactly where it was at. And I'd remembered that years and years ago, when I was just a kid (I had a motorcycle when I was 13) and I'd rode over there, and I remembered a hole there that they claimed they'd taken twenty-two thousand out of. And there was a tripod over it. It answered the description to a tee, and I was just about certain that's where they got this gold.

Prospecting in the snow

It was real bad weather comin' back. It looked like it was gonna rain or snow. The next morning we got up early at daybreak, looked out the window, and there was three or four inches of snow on the ground. And, oh man, I was discouraged, 'cause I wanted to go.

We had a real hearty breakfast. And then, he got in the Model T Ford, and I got on my old Harley- Davison motorcycle, and away we went.

Well, we got out as far as the Muroc Dry Lake, and boy, when we hit that Dry Lake, it was just slick as glass. And I'd ride a little ways, and down I'd go.

But we finally got across the lake. It was sandy, but we made it up through the sand, through the greasewoods.

When we got close to this place, well, boy piled off of my motorcycle and started prospectin', you know. Them little hills looked good.

Fred didn't. He was an old time prospector and he really knew what he was doin', and he jus' went right to where they'd taken this out. And in about 15 minutes, he says, "Joe, I found it."

Gold in a skillet

The old timers used a little egg skillet to do most of their pannin' in, and so he got this little egg skillet out, and we had another bigger pan and a canteen of water. And he filled that little pan full. And he got a couple of flat rocks and crushed this stuff up where it was pretty fine, and started pannin'. He got her down where he had about a tablespoon full of stuff. then he rocked that pan back. and man, he had a tail o' gold three or four inches long. And some of that gold, oh, it was just terrific.

And so, then we jus' started digging down, and pretty quick we hit a little vein about six inches. Beautiful, red hematite. And, man, you could just see the gold in it.

So we went back, and then we came back again Sunday. I couldn't go with him. He had to lay around. Next week, though, was my Christmas 'vacation. And boy, by the time of the end of Christmas vacation, why we'd worked it all out. It went right down and pinched out.

But we did try doin' a little trenching across to see. It jus' was one of them veins that filled in from the top, and that's all there was to it.

But we did get quite a little. Made a little stake – not too much. But somewhere around four or five hundred dollars.

'Cause he could tell I wasa good worker and all. So, he grabbed a freight train then, the next day, and away he went. And when I got home from school, why, he was gone.

So, when I graduated from school, then I went down to see him. And he was down at Kelso, and I went in partners with him.

And we worked down there. It's another story...