Looking for 'Gold in Them Thar Hills!'

EDITOR'S NOTE: This is the second in a two part series on prospectors and mines in the Antelope Valley. Yesterday's stories concerned the local mines, and today the focus is shifted to the men who dig the earth for gold.

The old prospector looked over at the red hill, surveying the rock and his chances. He had searched that area of the desert for days hoping for a strike, and soon he would give up and try somewhere else. He sometimes gave up on a location, but he never would give up completely. He had prospected for gold all his life and that's all he knew.

Coming upon some rock that was rich with quartz, the prospector picked up a specimen, crushed it up and put it in the egg skillet that he both cooked and panned with. From his canteen, he added some water, sloshing the mixture back and forth.

His heart leaped and a great smile cracked his weathered face. In his pan, as he rocked it back, appeared a tail of gold a few inches long. Urged on by his good fortune, the old man began digging in search of the vein he believed existed somewhere in the red rocky hill. 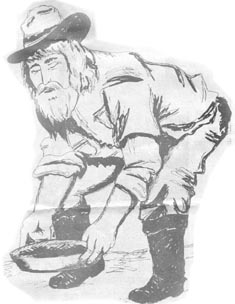 Prospectors no longer line the ' hills of the Antelope Valley as they once did, according to local legend, yet some still remain.

Of these, some are retired, but some push on with unharnessed optimism, always believing that they're going to find a strike that will put them on easy street.

The tales miners and prospectors can tell about their exploits far outnumber the strikes that ever paid off, but as an intregal part of Antelope Valley history, the stories themselves are just about all that remains of the legend called the "Old West."

"Optimistic" is the word that best describes prospectors. Their lives are always uncertain. They live from strike to strike – and always keep hoping.

"All miners are optimistic " said Rose Bright, wife of Jack right of Mojave who was a gold miner until 1949. "They think they can make it. And they make it, is the funny part. Then they quit doing everything and use up their money and go back and try again."

"I've been at it all my life. In fact, that's all I've ever done," Bright himself explained. "When I first started over in southern Nevada, I was 15. Of course, my folks were in the mining field. That's really where I started. Moved up here in 1929."

He worked for the Burton Brothers, who were leasing the Cactus Queen Mine on Middle Butte for awhile. They also owned and operated the Tropico Gold Mine in Rosamond.

"We produced about $250,000 in about three months out there (at the Cactus) and that was all for awhile. There was nothin' else for me, so I had to find another job.

After having worked as a mine foreman for the Burtons until 1936, and a superintendent until 1949, he left the gold mining field forever. It was then that Bright went to work at the Monolith Portland Cement Company, until his retirement.

In his prospecting days, it was often difficult living until the next gold strike was made. "It was always exciting," he said, "but sometimes you go pretty hungry.

"I prospected for myself when I first got here. Then we got married, and I still worked, by myself," he explained. "I put her to work, too," he chuckled.

"We made a living, that's about all. Enough to keep us living during the Depression."

"In those days,'' said Rose "You were dependent on the smelters. Sometimes you didn't hear for months, and I didn't like that. And I encouraged him to go work for wages."

When he first came to the Antelope Valley, Bright said there weren't too many other miners around. The Golden Queen Mine on Soledad Mountain was developed after 1934, "that brought a lot of them in," he aid.

"Every hill had some kind of a prospector on it," Rose agreed.

"Broke my finger once. Came pretty near to gettin' killed twice. One time was a cave in," he explained. "I was lucky – got out of the way.

"The other time, I was down at the bottom of a shaft. A bucket broke loose. I was lucky again. There was just room for me and the bucket. I got in a comer, the bucket took the other corner."

But Bright said he isn't sorry he's no longer in the field, or on the hill. "I'm not able to work anymore," he said. "Let somebody else do it."

Yet he still pays attention to the prices of gold and silver. "Gold this mornin' was up to $483 per ounce. Silver was only $12. I get all that in the mornin' on the radio."

Rose seemed to understand. "You can ask a miner and he might not know the date, but he'll know the price of gold. Underneath they're always prospecting and looking," she explained. "Once a miner, always a miner."