It was beautiful ore. I found a piece of it that had gold as big as a nut in it. It was perfect as a dice, and that thing was half gold. I lost it. I wish I had it today. I carried that for a number of years in my pocket. – Joe Pauley Sr., local prospector

Gold has had power over mankind for thousands of years. It has caused wars, broken friendships and has been a motive for countless murders. It has also been important in various religions, figures in myths and legends of many countries and is also considered good luck.

The metal also caused a rapid settlement of the U.S. western territories when in 1849, the California gold rush began. More than 100,000 people were drawn to this untamed state to search for gold after it was discovered at Sutter's Mill.

Although there was no gold rush to such proportions to the Mojave Desert, and specifically to the Antelope Valley, gold mining plays an important role in local history, from its discovery in 1882 by Ezra Hamilton at what is now Tropico Hill in Rosamond, through the boom period of gold production in the 1930s, until the present. 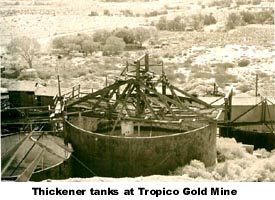 The ancient fascination with gold exists here as it did all over the world to races of men.

On a slow day at his pottery works in Los Angeles, Ezra Hamilton began panning some of his clay for gold. The red clay, which had come from his land in Rosamond, yielded some specks of bright metal.

The year was 1882. Gold mining in the Antelope Valley had begun.

The biggest gold producer, however, was the Tropico Mine, because of the length of time it operated.

Dorene Burton Settle, who presently owns part of the mine with her husband Glen, explained, "Burton's Tropico is probably the longest in operation in the area, from about 1882 until 1956. Other mines in the area didn't start up until the '30s.

Settle's father, the hate H. Clifford Burton, purchased the Tropico stocks with his brother, the late Cecil Burton. Business picked up, and was doing well in the '30s, providing jobs during the Depression for about 150 Antelope Valley men, said Settle. In 1934, President Franklin D. Roosevelt raised the price of gold from $20.67 to $35 per ounce, giving the mining industry a boost. For the Tropico, and all area mines, this was the boom period.

The mines are mostly located between Rosamond and Mojave on four different sets of rocky hills. These are, from south to north, Tropico Hill, Middle Butte, Soledad Mountain and Standard Hill. The list includes the Cactus Queen, from which 230,000 tons of ore yielding a total value exceeding $5 million was produced, according to the 1970 county report of the California Division of Mines and Geology.

The Golden (originally, the Silver) Queen, produced more than 500,000 tons of ore, yielding over $6 million in gold and silver.

Then there is the Elephant Eagle mine, which put the late Governor Goodwin J. Knight through the University of Southern California and helped pay for his 1954 gubernatorial campaign.

The U.S. government closed gold mines from 1942 to 1945 to free miners so that they could work at mining metals more strategic to the war effort. After the war, inflation made gold mining at Tropico and everywhere, unprofitable, and in 1956, Burton's Tropico Gold mine ceased production.

After Hamilton's discovery of Tropico, W.W. Bowers found gold on March 8, 1894, on Standard Hill. He called the claim the Exposed Treasure, which produced about $7 million.

Soon, the Karma, Queen Esther, the Whitmore, Elephant, Echo and Grey Eagle, were discovered and developed.

Harvey and Seely Mudd formed the Mudd Mining Company, and turned the Cactus Queen into a major producer in the late 1930s. In six years, the, mine produced its $6 million.

A man named Winkler found the Winkler mine while working for the Mudd Mining company.

Dorene Settle related the story. "Winkler was doing prospecting up on the hill (Middle Butte), and he made a pretty good strike. But it was on the Mudd's property. So he went to them and wanted to lease the land. And they said 'no.'

"And so they had their engineers go in – they had some of the best mining engineers in the world working for them – and gridded the place and took samples all over the place. And they couldn't find it.

"And in the meantime, Winkler died . And he left the map for his widow. Finally the Mudds went to the widow, and she showed them where the mine was.

'She sold them the map, then."

George Holmes discovered the Golden Queen in 1934, on Soledad Mountain. The mine, which produced $6 million, was sold for $3.5 million to South African Goldfields Consolidated, making Holmes and his associates world famous.

Another 1934 discoverer was Jess Knight, who owned the Elephant Eagle mine on Soledad Mountain. His son, Goodwin Knight, became governor of California.

Glen Settle, who is an Antelope Valley historian, recalled an incident involving the late governor: "After he was governor, he came down here (to Tropico). He was running for election to the senate.

"We were having a mining convention at the mine, and he was supposed to speak to the miners here at one o'clock. He kind of got carried away.

"He saw a lot of his old friends from Mojave mining days and he was supposed to be at another function down around Imperial Valley or somewhere about four. And it was three-thirty and be was still talking here. Everybody was trying to get him going, and get him back to his plane so he could get down there.

"And he was only interested in talking to all of his old mining cronies."

Many believe that gold mining in the Antelope Valley isn't over yet. There are still prospectors on both Soledad Mountain and Standard Hill.

Although there may never be as many miners as there were in the boom period of the '30s, at least one prospector, like all prospectors, is optimistic.

Muroc-born Joe Pauley Sr., who is doing work at a mine near Standard Hill, said he believes the future in gold mining is bright.

"If gold goes up like they predicted (I read that it might go up to $5,000 an ounce), the Silver Queen, the Cactus, the Tropico, the Heart of Mojave, the Old Rover, The Standard Hill – all of them will be running full blast. "